The Scorpion II TA from TrafFix Devices is the world's first and only MASH Tested, Passed, and Eligible Towable Attenuator.

What is MASH? Read Eligibility Letter

The Scorpion Towable Attenuator requires little or no modification to host vehicle or additional mounting hardware beyond the standard pintle hook and ½" thick × 32" wide steel frame plate. This single point attachment makes the installation of the Scorpion II TA quick and easy.

When impacted, the Scorpion's modular design crushes in progressive stages, which reduces the impact forces on the vehicles occupants and results in lower repair costs and easy parts replacement. Rear axle placement improves attenuator stability and prevents the tail from "bottoming out" on driveways and uneven surfaces. The overall length of the Scorpion II TA is only 17' 10", the shortest on the market. The integrated electric brake system comes standard on all Scorpion II Towable Attenuators and are automatically activated in the event of attenuator separation or hitch failure. The Scorpion II is equipped with omnivolt LED brake, directional, signal and running lights to further enhance advanced warnings to drivers.

The Scorpion II TA can be used on support vehicles with a minimum curb/actual weight of 12,000 lbs with no upper weight limit (infinite weight). With the Telescoping Anti-Rotational System (TARS™), the Scorpion II TA remained attached to the host vehicle and pintle hook during all impact testing. TARS minimizes the rotation of the Scorpion II during angled and offset impacts and prevents the attenuator from separating from its host vehicle.

The curved side rails of the Scorpion II TA are made from corrosion resistant aluminum tubes and offer full width impact protection along the entire length of the Scorpion II by safely redirecting the impacting vehicle away from the deadly "coffin corners" at the rear of the truck. The Scorpion II Towable Attenuator is the world's first and only MASH Tested, Passed, and Eligible for TL-3 applications, with and without with optional display panels or message boards; see FHWA Eligibility Letter CC-138 for details. 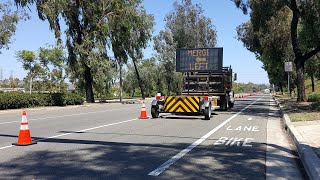